In 1981, two Solidarity activists in Warsaw, Poland felt a change in the air. They jumped on a train and escaped the introduction of martial law by only a few weeks. They were now refugees and unaware of what the next days, weeks and months would bring.

Within the year, I was born in an Austrian refugee camp and before my first birthday those activists (now also parents) and I touched down in Auckland and were given shelter at the Mangere refugee camp.

We stayed in New Zealand until things calmed down in Eastern Europe. In 1993, we returned to Poland. After finishing my education in Warsaw, I moved to Spain to find new experiences, a new worldview and continue my love of learning languages.

As the years passed I continued to travel, moving more frequently from country to country than town to town.

I didn’t realise at the time, but every role I ever had was in sales and relationship management. Sales and Consulting found me long before I realised it had.

In 2012, I returned to New Zealand and continued to work in the area I had developed a passion for over the previous 15+ years. I took on a role with a small New Zealand software firm doing amazing things in Europe and the US.  My role saw me looking after our largest US clients, including Intel, Southwest Airlines, Chevron, Dow Chemical and Eli Lilly; often meeting clients at office campuses bigger than many Kiwi towns.

Doing business the US is very exciting, but can be impersonal at times. After five years of flying across the US, I found myself looking for a new challenge and found Spotlight Reporting. Spotlight Reporting’s mission to digitally transform the offerings of traditional accountants was impressive, and they are doing amazing things in global markets. The position was a great fit for me, looking after New Zealand accounting firms south of Taupo.

I jumped at the opportunity and was delighted to secure the role of Senior Account Manager to the NZ South & Central Regions.

I’m honoured to work with so many progressive accounting firms who understand the impact technology has had on their industry. Spotlight Reporting have acted as positive disruptors to traditional accounting practices, and have unlocked attractive value propositions to accountants that can be easily on-sold to clients. Spotlight Reporting’s drive to deliver services of value has given me both a passion for the industry and for the tools we provide.

I’m now celebrating my one-year anniversary at Spotlight Reporting, and in a short time, I’ve seen clients who were unsure whether they could sell advisory services embrace the current opportunity in the industry and use it, not only to retain customers but to significantly grow their firm's revenue. I’ve also seen our development team, who still all work out of Petone, deliver new tools that take centre stage in the global reporting and forecasting eco-system.

I’m grateful to have found an industry that, even though it is still new to me, excites and motivates me to find new ways to help our customers.

Left: Anna as a child. Right: pictured at an event promoting Spotlight Reporting. 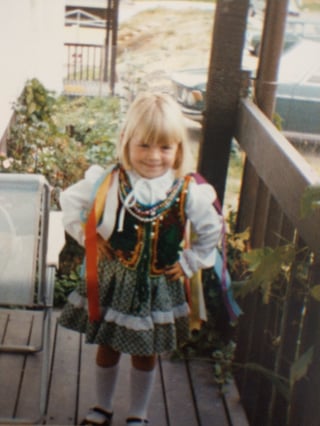