UK based Spotlight Reporting team member Kirsten Walton is exceptionally talented—not just in her current role as Manager for Education, Training, and Support, but also as a performer.

“I do do straight theatre,” she says, “but I prefer musicals. I tend to play villains quite well.”

This is a surprising statement, if you don’t know her well. In everyday interactions with her customers, Kirsten is warm, bubbly, and kind. But give her a character to play, and she becomes unrecognisable.

“There’s no denying these are the most tasteless pies in London,” she says, in a spot-on performance of Mrs. Lovett from Sweeney Todd. “I makes ‘em. Are you gonna try ‘em then or what?”

Perhaps fortunately for her clients, playing villains isn’t part of her role.
Day-to-day, she’s in charge of Spotlight Reporting’s education offerings, including certification, webinars, and one-to-one and one-to-many training sessions for larger scale business partners. Kirsten heads a global team, and between running our help centre and keeping our fresh content circulating, they have plenty going on.

A background in the ecosystem
Before moving to Spotlight Reporting, Kirsten worked at Sage, another accounting software company.

“I worked at Sage for nearly 15 years,” she says. “I started off in tech support, then moved on to the knowledge management team as a technical author. We were in charge of webinars, newsletters, the help centre—which is similar to what I do at Spotlight.”

Like Johannes, Kirsten found an ad on LinkedIn for a role at Spotlight Reporting. She applied for the job at 8pm, and was invited to interview with us by 10:30pm that same night.

“It was the quickest interview process I’ve ever had!” she says.

It soon became apparent that Kirsten was an immediate fit. She was pleased that the role would keep her in the same ecosystem as Sage, and utilise her experience in the sector. As an added bonus, the UK team were looking for someone to produce their webinars, and Kirsten had had a lot of experience doing just that. She started with Spotlight Reporting in 2016, and never looked back.

Modern and Global
The cloud technology aspect of our tools is a real value proposition for Kirsten. Having worked previously with mostly desktop-based software, she loved being part of a company at the forefront of accounting innovation.

“I love seeing not only the newer firms adopt cloud technology, but also the older accounting firms, who have picked up this newer way of doing things, and just run with it,” she says. “Being involved with the way things are changing is something I’m proud about.”

“Working for a global company, you’re dealing with people all around the world,” she says. “Not just colleagues, but customers as well. It’s definitely another selling point.”

Kirsten started at Spotlight Reporting as Support Specialist, but was recently promoted internally to her current job as Manager for Education, Training, and Support. Our culture of internal promotion is something we’re very proud of, and Kirsten is flourishing in her new role.

“I love the variation,” she says. “There are things we have to do every day, yes, but every training journey is different. We tailor our training to suit different clients, and get to watch them progress, and see what they’re doing for their clients. No two days are ever the same.”

This has never been more true than now. Since lockdown, Spotlight Reporting’s teams have all been working from home, and Kirsten’s job has an urgency to it didn’t have before.

“We need to be a lot more responsive at the moment, because people are on edge,” she says. “I’m monitoring things pretty much constantly that I might not have had to monitor before. We need to make sure we’re getting pinged for urgent queries, so we can support our customers as soon as they need us.”

“We can’t have people floundering around in the dark,” she says firmly. “Uncertainty is quite present enough in everyone’s lives right now, without wondering how they’re going to get their clients’ reports done. We need to be there for our customers. It gives them a level of confidence that they need.” 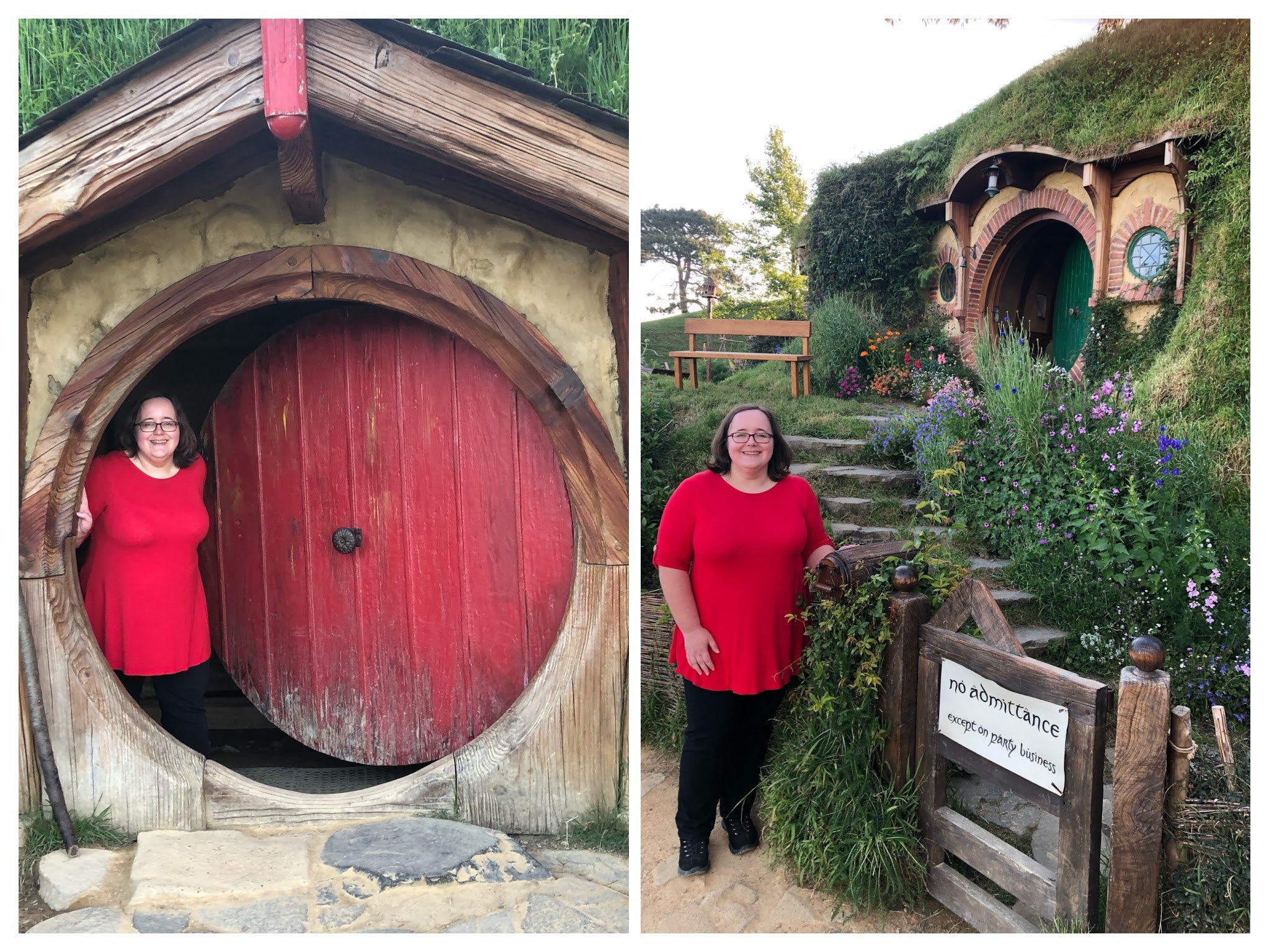 At Hobbiton New Zealand, during a visit to Spotlight Reporting's NZ headquarters

In the Spotlight
It isn’t just her job that has been affected by the lockdown. In her spare time, Kirsten sings with an incredible community choir, who are currently on hiatus due to the pandemic. Similarly, she hasn’t been able to take part in musical theatre productions, because rehearsals have gone right out the window.

But while you can keep the woman out of the theatre, there’s no getting the theatre out of Kirsten. When asked about previous performances, she obliges with a quick character piece.

“I would love to be Norma Desmond,” she says, before dropping her own northern accent and mannerism in an instant to embody the American character. “And now, Mr. DeMille, I’m ready for my close-up.”

Other credits include many of the classics: Avenue Q, Chess, Full Monty, the MD in Chicago, Mrs. Lovett in Sweeney Todd. One time, she was “press-ganged” into a production of the Sound of Music, at the last minute because they were short of nuns.

“It’s really hard to be a nun sometimes,” she sighs.

Bravo Kirsten. We can’t wait for your next performance, and wish you all the best in your dual careers as Manager of Education, Training and Support, and Purveyor of the Worst Pies in London. Kirsten sings "Taylor the Latte Boy" during a choir performance.

Enjoyed this article? Check out a recent interview with our CEO Richard Francis in our "Designed by Accountants, For Accountants" series.