Meet the next generation of game developers

Chris Jaques, our Junior Developer at Spotlight Reporting, recently stepped into the classroom to teach a group of 10 - 12 year olds how to create adventure-style video games.

One thing we're encouraged to do at Spotlight Reporting is to give back to our local community through sharing knowledge. Chris is a Developer and he’s just spent the whole week teaching some kids how to design video games at Thorndon Primary in Wellington.

"Volunteer days have definitely stepped up. When I was at primary school, the only thing that came close to this was huddling around our old class computer learning how to play solitaire and minesweeper." – From an anonymous older person working at Spotlight Reporting.

What is game design and what skills does it encourage?

Game design is the art of applying design and aesthetics to create a game for entertainment, educational, or experimental purposes. Chris worked with the kids to develop an adventure based car game.

Children teamed up in pairs and used a programme called Unity to build and control a vehicle in an environment that they designed and developed on their own. The brief was: “Your car is stuck and you need to drive it out safely”. Some of these creative kids designed:

Over four days, these 10 - 12 year olds built their car and their world from scratch, added a start menu, and threw in a custom soundtrack made using Garage Band. 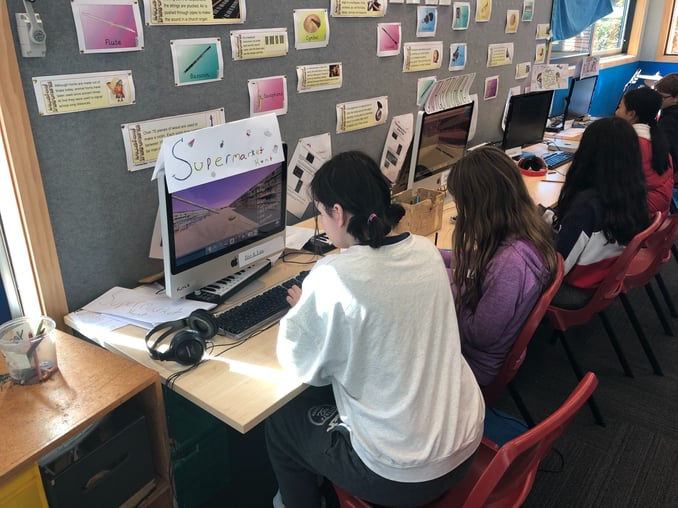 Love the idea of teaching students – how did it come about?

Chris has the loudest laugh out at Spotlight HQ and one morning a few of us noticed he wasn’t in – someone said he was teaching kids how to design video games for the week, so one of us sent him nosey txt and asked what he was really doing.

Chris (left) with Andrew, the teacher

The conversation moved to Slack and Chris ended up dishing details on an amusing conversation with Andrew, the teacher of the kids, who was also Chris' old music teacher in college.

In 2014, Andrew told Chris the school was running their annual creativity week – he was going to get his class to build a house using free design software off the internet so they could understand the building process. Cool, right?

Chris: “I basically said: Andrew, that sounds like crap! There was a bit of banter and Andrew came back with: “Well what would you do?”

"I showed him a plan I’d hatched up about this video game with the car adventure, that would actually be of interest to kids. Andrew was really impressed and asked me to take the lead, since it would be too hard for him to do it in essence."

That was four years ago and Chris has been taking the class every year since then.

It turns out you need to have the right connections to be running a teaching gig like this. Apart from knowing Andrew, Chris had a long history with the school – his aunty was the school office manager and he used to hang out in her office every day after school. This continued through college and beyond, leading up to the ultimate perk of free car parking at the school when he became a uni student. “That saved me HUNDREDS of dollars!”

Last point: he casually claims to be the school's IT wizard.

“I used to fix their computers and I did general IT stuff as an adhoc contractor before I started working at Spotlight Reporting. Anytime their other contractors said something was too hard or impossible, they’d call me.”

Chris, well done on your week of teaching video game design and for sharing your skills to inspire other children!